To make the wonton wrappers

Put flour and salt into a mixing bowl and mix well. Beat an egg in a small bowl and add into the flour. Blend in. Gradually add water and mix the dough until it has a saggy appearance. Use your hand to knead the dough for about 3 minutes. Roll dough into a bowl and cover with cellophane. |Put the dough into the fridge for at least 1 day.

Boil the bok choy Chinese vegetables for about 5 minutes. Chop into small pieces. Chop chives into small pieces. Combine all the ingredients and mix well. Add 1 to 2 teaspoons of the filling to each wonton wrapper. Bring the sides of the wonton wrapper and squeeze together. Put wontons into boiling water. Cook the wontons for 2 or 3 minutes, until they float to the surface. Strain the wontons and put into a serving bowl.

To make the Chinese noodles

Pour soup broth into the bowl of wonton noodles. Add a dash of sesame oil for a nice fragrance. To make a simple soup broth, put 2 to 3 cups of water into a pot. Bring to a boil and add 1 teaspoon chicken soup base. Enjoy! 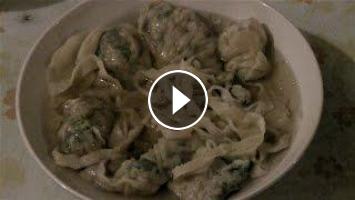 How to make the best Homemade Wonton Soup With Noodles Recipe. You can use the store bought wonton wrappers for this recipe. As well, I'll show you ho...