hong
New Car Reviews, New Car Commercials & Best Car Video's
The No. 1 Channel For Car Lovers
Make Sure To Subscribe
最新汽车评估，
最新汽车商业广告& 权威汽车视频，
请订阅收听爱车族的第一首选频道。
最新の車レビュー、最新の車広告＆権威である車のビデオ、車好き方は優先選択するチャネルにご注目して下さい！
최신 자동차 평가
최신 자동차 상업 광고
최신 자동차 시청
자동차를 사랑하는 사람들의 제일선택 채널
열람 바람
MotoGP and BMW M Division: these two partners have formed an ideal combination for almost two decades. MotoGP is the pinnacle of motorcycle racing and features the best riders in the world on high-performance racing prototypes, in the development of which the manufacturers implement their latest technological ideas. High-performance and motorsport genes – attributes, with which BMW M Division is also synonymous. Since 1999, BMW M has been a permanent member of the international MotoGP family. The successful partnership with organiser Dorna Sports has grown consistently over the years, and is set to continue to run well into the future. In 2014, Dorna Sports and BMW M Division extended their cooperation up to and including 2020. Partnerships like this, which span decades, are extremely rare in top-class international sport.
The BMW M2 Coupé (combined fuel consumption with M DTC: 7.9 l/100 km; combined CO2 emissions: 185 g/km), which was unveiled in Detroit in January 2016, provided the ideal basis for a MotoGP Safety Car, particularly as its distinct racing genes are part of the product DNA. The new inline six-cylinder engine with innovative M TwinPower Turbo technology and three-litre capacity guarantees extremely sporty performance. With a maximum output of 272 kW/370 hp and a maximum torque of 7,000 min-1, the extremely rev-happy power train really makes its mark out on the track. The intelligent, lightweight concept, low point of gravity and small, unsprung weight are further trump cards, which help ensure the maximum agility and dynamics of the high-performance coupé.
The high-performance BMW M Safety Car fleet for MotoGP comprises other high-performance cars and BMW S 1000 RR Safety Bikes, as well as the actual BMW M Safety Cars themselves. Each has its own role, but all ensure that race events run safely and smoothly.
All the cars also have their own clearly-defined roles during the races themselves. This begins during preparations for the start of the individual races. About half an hour before the start, the BMW M2 MotoGP Safety Car, a Medical Car and the Safety Bikes take their place on the grid, in front of the motorcycles. Ten minutes before the start, the two Safety Bikes complete one lap before heading into the pit lane.
The new BMW M2 MotoGP Safety Car is fitted with numerous parts from the product range of BMW M Performance Parts. BMW M Performance Parts are also installed in the other official cars of the MotoGP safety car fleet, optimising both the sporty appearance and the performance.
The BMW M2 MotoGP Safety Car First TV Commercial The BMW M2 MotoGP Safety Car CARJAM TV HD 2016 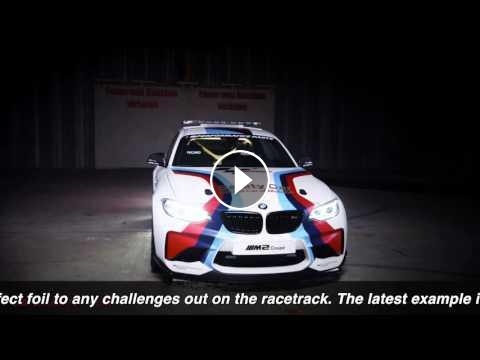