ava
How To Paint Chinese Bamboo Painting - Meditations Chinese Art & History.
After speaking with someone from another Channel about Bamboo practice it was apparent that they had an interest in Chinese Art and painting and they stated they wanted to learn Bamboo.
Here, I thought, I have not taken on Bamboo for a while. And so for the fun of this newcomer to the Chinese Arts and for myself I thought I would have another more traditional attempt at Chinese Bamboo.
I have tried my hand at Bamboo but I used examples from a book that displayed paintings from some thousands of years ago.
The main Bamboo stems of that suite of examples (Some 40 strong.) did not use the now common practice of stroking the paper on one motion for the stem segments but rather used a two stroke method even for the finer stems.
Partially, this is what attracted me to that example style and while I enjoy seeing the Bamboo appear before me, there is a complex manner and very personal expressiveness to the final compositions.
It isn't as easy as it appears and all we can ever hope to do is display what appeals to US.
Far too many Channels now are depicting Chinese Spontaneity as a kind of "This is the way it HAS to be!" example and, studying the Masters works and words, this never was its intention.
It has far more freedom than those who want to force otherwise would have you believe.
The difficulty is trying to get the REAL and the TRUE message out there so that the West is NOT deterred because of a modern sense and artificiality in promoting an imaginary style of complexity that, in truth and all through history, never actually existed at all.
There IS a way of making the strokes on paper match those of a Chinese Essence, but to define the complete suite of acts as having a strict agenda for final impression... I think this is fictionalising what should really be a more meditative and personal essence; toning it into a darker and more foreboding output than historically was never its intention. 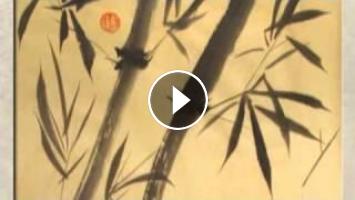 How To Paint Chinese Bamboo Painting - Meditations Chinese Art & History. After speaking with someone from another Channel about Bamboo practice it wa...