You disliked this video. Thanks for the feedback!

Added 3 years ago by ava
75 Views
To read English subtitles, please click CC on the right bottom of the player and choose English.

The CCTV New Year's Gala (simplified Chinese: 中国中央电视台春节联欢晚会; traditional Chinese: 中國中央電視台春節聯歡晚會; pinyin: Zhōngguó zhōngyāng diànshìtái chūnjié liánhuān wǎnhuì) is a Chinese New Year special produced by China Central Television. Broadcast on the eve of Chinese New Year on its flagship CCTV-1, satellite channels CCTV-4, CCTV-9, CCTV-E, CCTV-F, and CCTV-HD, the broadcast has a yearly viewership of over 700 million viewers, making it one of the premiere television events of Mainland China. It has the largest audience in the world.[1] The show features various acts, such as drama, dance, music, and comedy. The CCTV New Year's Gala in this year was held on Feb.9, 2013, the Chnese New Year of 2013. 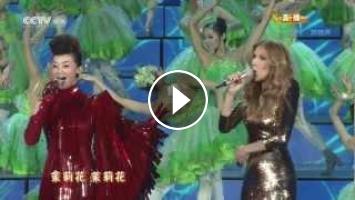 To read English subtitles, please click CC on the right bottom of the player and choose English. Title: Jasmine Flower 茉莉花 (Mo Li Hua) This is a popul...